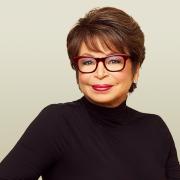 Go To Past Event
from Valerie Jarrett: Politics, the Obamas and Finding My Voice held on April 11, 2019

In Conversation with London Breed
Mayor, City of San Francisco