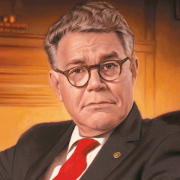 Go To Past Event
from Senator Al Franken: Giant of the Senate held on July 6, 2017

How did an award-winning comedian defy the odds and get elected to public office? Hear more about Senator Al Franken’s journey as he shares behind-the-scenes moments of his foray into politics and working in Washington, D.C.

Senator Franken has represented the state of Minnesota since 2009. He serves on several committees, including the Judiciary; Energy and Natural Resources; Indian Affairs; and Health, Education, Labor, and Pensions. Before entering the political scene, Senator Franken was a popular “Saturday Night Live” writer and featured player, comedian, and radio talk show host.