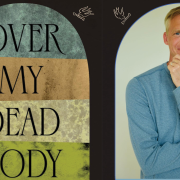 Go To Past Event
from Over My Dead Body: A Lively Tour of Famous American Cemeteries held on November 2, 2022

Join us to explore the history of how, where and why we bury our dead. Melville will take us on a lively, wide-ranging tour of the history of famous American cemeteries—places that have mirrored passing eras but have also shaped them. Cemeteries gave birth to landscape architecture and famous parks, as well as influenced architectural styles. They’ve inspired and motivated some of our greatest poets and authors—Emerson, Whitman, Dickinson. They’ve also been used as political tools to shift the country’s discourse and as important symbols of the United States's ambition and geographical reach.

But cemeteries are changing and starting to fade away in the 21st century. Burying embalmed bodies is incredibly toxic, and although cremations are now even more popular than burials, they’re not great for the environment either.

A summer job cutting grass at his hometown cemetery inspired Melville to explore every issue surrounding cemeteries—history, sustainability, land use, and more—but above all to think about what it really means to memorialize the lives of those we love.

Cemeteries in Over My Dead Body

The Chapel of the Chimes in Oakland, California