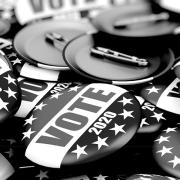 The 2020 Election with Tiffany Cross, Rich Thau and Rick Wilson

Go To Past Event
from The 2020 Election with Tiffany Cross, Rich Thau and Rick Wilson held on June 23, 2020

The conventional wisdom on this fall’s election is that it once again will come down to a handful of voters in a handful of states.

“This is a game of small numbers,” says longtime Republican political strategist Rick Wilson. “Going out there and hunting down these small pools of persuadables is critical because we’re in an Electoral College game.”

Wilson is author of Running Against the Devil: A Plot to Save America from Trump--and Democrats from Themselves, and one of the co-founders of the Lincoln Project, a political action committee of renegade Republicans dedicated to defeating Donald Trump and Trumpism.

“There is a price tag in terms of lives and in terms of our economy,” Wilson says, “and we're going to articulate that in the ways that as former Republicans we’re very skilled at.”

But could this election be more a referendum on the current president? And could it be determined by more than a handful of voters in a few battleground states?

“I would rather focus on people who have skin in the game, pun intended, and who are ready to hit the pavement,” says journalist Tiffany Cross, author Say It Louder! Black Voters, White Narratives, and Saving Our Democracy.

Cross believes that issues and policy are especially important to voters in marginalized and disenfranchised groups “because these … communities are overly impacted. So they can’t afford to not pay attention to policy.”

And yet for some voters, at least at the presidential level, the election does come down to personality.

“Are they Coke or are they Pepsi? They’re both,” says Rich Thau, president of the communications firm Engagious. “They can vote for a D or vote for an R depending upon who attracts them more.”

For the past 15 months Thau has conducted focus groups with swing voters in key midwestern districts – and concern for climate is not among the characteristics that stand out about these voters.

“Climate change is not a top-tier issue for these swing voters,” notes Thau. “It kind of falls in the middle between not being a hoax and not being an emergency.”

Engagious
The Lincoln Project
Running Against the Devil: A Plot to Save America from Trump--and Democrats from Themselves
Say It Louder! Black Voters, White Narratives, and Saving Our Democracy