Best-selling author Mark Shaw, who has become a magnet for crowdsourced information about Marilyn Monroe, JFK and prominent journalist Dorothy Kilgallen ever since his lectures went viral on YouTube, returns to The Commonwealth Club to share new research about the cover-ups that followed those three celebrities’ deaths. Revealed for the first time in his latest book, Fighting for Justice, is evidence from a still-living legislative aide to a Warren Commission member never identified before that the inner workings of the commission involved “internal corruption,” and that commission members felt pressure from President Johnson, Chief Justice Earl Warren, and J. Edgar Hoover to support the “Oswald Alone” theory. Shaw also argues that that commission member was likely the one who surreptitiously passed Jack Ruby’s testimony to journalist Dorothy Kilgallen prior to its release date—triggering an FBI inquiry.

Join us to hear Shaw describe what a “rat’s nest” Marilyn fell into when she fell in love with Frank Sinatra, and to hear how important the almost unknown 18-month investigation into JFK’s assassination by Kilgallen would have been had all her research papers not disappeared when she mysteriously died. Continuing his quest for the truth about the deaths of Dorothy and Marilyn, Shaw adds new evidence to the pile, using first-hand accounts that he says make it clearer than ever that the official explanations for those deaths are not credible.

Author, Fighting for Justice: The Improbable Journey to Exposing Cover-Ups about the JFK Assassination and the Deaths of Marilyn Monroe and Dorothy Kilgallen 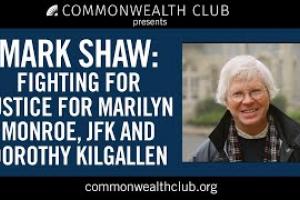 Mark Shaw: Fighting for Justice for Marilyn, JFK and Dorothy