Andrew Fraknoi returns to The Commonwealth Club to share the first available images from the James Webb Space Telescope―which were applauded by scientists, the media and the public.

But there is far more to our expectations from this remarkable space instrument than just pretty pictures. Fraknoi explains what makes the Webb a truly pioneering instrument, what the first images actually show, and what scientists expect the telescope to accomplish in the years to come. He also discusses how the Webb observes an “invisible universe” of infrared rays, and what astronomers are hoping to learn about “cosmic evolution”―the birth and death of stars, planets and galaxies.

A Technology& Society and Humanities Member-led Forum program. Forums at the Club are organized and run by volunteer programmers who are members of The Commonwealth Club, and they cover a diverse range of topics. Learn more about our Forums.

In association with Wonderfest.

The photo of the Tarantula Nebula courtesy NASA. 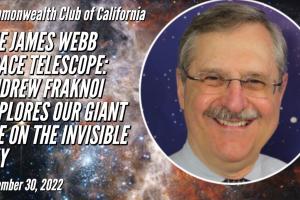 The James Webb Space Telescope: Our Giant Eye on the Invisible Sky