Ramses the Great ruled Egypt more than 3,200 years ago, but he made sure we would still be talking about him today. He ruled for 67 years, probably starting on May 31st (III Season of the Harvest, day 27 to ancient Egyptians) in 1279 BC. He soon set about creating a new capital city in the Nile delta, where he had chariot, weapon and shield factories built. Not long thereafter he defeated the Sherden pirates who were seriously harassing sea traders in the Mediterranean, and “won” the Battle of Kadesh against the Hittites in the largest chariot battle ever fought. He also had enormous temples, obelisks and statues erected all over the New Kingdom, and ordered lots of gold objects.

Dozens of those objects are on display until February 12 at the de Young Museum in a state-of-the-art exhibit featuring the greatest collection of Ramses objects and Egyptian jewelry ever to travel to the United States. Along with colossal royal sculpture, the exhibit highlights recently discovered animal mummies and treasures from the royal tombs of Dahshur and Tanis. Visitors can also immerse themselves in multimedia productions that re-create moments from Ramses’s life or take a virtual tour of Abu Simbel and Nefertari’s tomb. The de Young’s ancient art curator, Renée Dreyfus, will share with us the stories of some of these art objects and how the de Young organized this outstanding and rare exhibit.

Egyptologist Rita Lucarelli will explain the evolution of the funerary beliefs of ancient Egyptian society from their origins in prehistory to the time of Ramses. She will draw on her scholarly work on the Book of the Dead to discuss the magical texts found in royal and elite tombs and how they compare to the "personal piety" or "popular religion" of the Ramesside period, about which there are many sources to draw upon from that well-documented society.

Among those documents is the earliest known peace treaty in world history—between Ramses II and Hattušili III, the Hittite king. It was recorded in two versions―one in Egyptian hieroglyphs and the other in Hittite using a cuneiform script. The two versions are nearly identical, but in the Hittite version the Egyptians are the ones who sue for peace, while in the Egyptian version the Hittites are the ones who sue for peace. Some things never change. 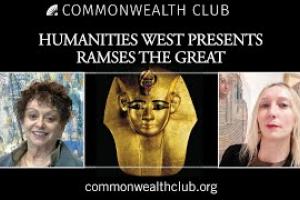