Long a fringe part of the American political landscape, conspiracy theories are now mainstream: 147 members of Congress voted in favor of objections to the 2020 presidential election based on an unproven theory about a rigged electoral process promoted, in part, by followers of the mysterious QAnon community, itself a network of believers of a wide-ranging conspiracy involving pedophilia among elected officials and other civic and business leaders. But these are only the latest examples of a long history of conspiracies that have gained adherents in society. In his timely new book, Conspiracy, Michael Shermer, founding publisher of Skeptic magazine, discusses what makes conspiracies so appealing to segments of the population.

Shermer finds that conspiracy theories cut across gender, age, race, income, education level, occupational status―and even political affiliation. One reason that people believe these conspiracies, Shermer argues, is that enough of them are real that we should be constructively conspiratorial: elections have been rigged, medical professionals have intentionally harmed patients in their care, your government does lie to you, and, tragically, some adults do conspire to sexually abuse children. But Shermer reveals that other factors are also in play: anxiety and a sense of loss of control play a role in conspiratorial cognition patterns, as do certain personality traits.

Join us for Dr. Shermer's discussion in our continuing series on false narratives. It is for anyone concerned about the future direction of American politics, as well as anyone who has watched friends or family fall into patterns of conspiratorial thinking.

A Personal Growth Member-led Forum program. Forums at the Club are organized and run by volunteer programmers who are members of The Commonwealth Club, and they cover a diverse range of topics. Learn more about our Forums. 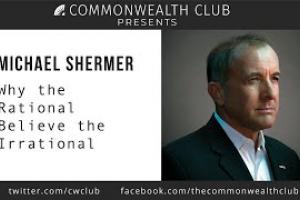