Craig McNamara: Because Our Fathers Lied

The Greatest Generation, having faced the Great Depression and fought World War II with a clear goal and responsible leadership, ended up enduring a generational divide with their Baby Boom children, because their continuing trust in American political leadership did not erode as quickly as their children’s did during the 1960s. The Vietnam War’s lies, deaths, destruction and deteriorated goals, arriving at the same time as political assassinations and the ongoing cultural violence in reaction to a seemingly simple plea for racial equality, undermined many a family’s intergenerational communications.

Prior to serving as secretary of defense in JFK’s cabinet of “the best and the brightest,” Robert McNamara was a skilled executive who had helped turn around the Ford Motor Company. Craig, his youngest child and only son, came of age in the political tumult and upheaval of the late 1960s and took part in anti-war demonstrations in direct conflict with his father’s policies. Then he traveled by motorcycle across Central and South America to learn the art of agriculture so that he could make “an honest living”.

Because Our Fathers Lied tells the story of a father and son at a pivotal period in American history. Join us to discuss the issues of the 1960s all over again with someone who lived the generational conflict more intimately than almost anyone else.

Founder and President, Center for Land-Based Learning; Owner, Sierra Orchards; Author, Because Our Fathers Lied: A Memoir of Truth and Family, from Vietnam to Today

Online:
Free for members
$5 nonmembers
$35 members or nonmembers with book 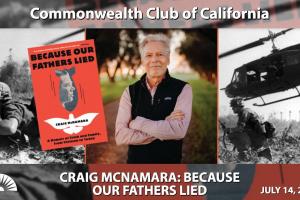 Craig McNamara: Because Our Fathers Lied