Inclusion: How Hawaii Protected its Japanese Americans from Mass Incarceration after Pearl Harbor

Following Japanʻs attack on Pearl Harbor on December 7, 1941, the United States removed 120,000 persons of Japanese ancestry from their homes on the West Coast and incarcerated them in remote camps. In Hawai`i, fewer than 2,000 people among the 160,000 were incarcerated. The question is, why not en masse? If people of Japanese ancestry were actually a security threat, as alleged, their large and concentrated numbers and proximity to strategic installations were a reason for removal from Hawai`i. Thus far, historians have only generalized that they made up over one-third of the population and were vital to the economy.

In his new book, Inclusion, How Hawai’i Protected Japanese Americans from Mass Internment, Transformed Itself, and Changed America, author Tom Coffman has written a meticulously researched history of the remarkable individuals from across ethnic groups and civilian, police, FBI and military institutions who came together to spare Hawai`iʻs Japanese community from mass removal and enable their sons to serve America heroically in World War II, inspired by American ideals of democracy and equality. The community, working from the ground up, won the battle for “inclusion” against the exclusionary policies of President Franklin Roosevelt, the U.S. Navy, various generals and the anti-Japanese elements of the press. With a post-war epilogue, it provides a window into the inclusive, multi-ethnic culture of todayʻs Hawai`i.

Tom Coffman is a political reporter and the author of six books, including Nation Within, a history of the annexation of Hawai`i; The Island Edge of America, a political history; and Catch a Wave, a study of the early statehood politics. His widely aired documentaries include First Battle: The Battle for Equality in Wartime Hawai’i; Arirang: The Korean American Journey; and Ninoy Aquino and the Rise of People Power. He is active in community projects in Hawaii, such as producing the theme films for the Japanese Cultural Center of Hawai`i, the Judiciary History Center, and Bishop Museum.

Robert Handa is a reporter for NBC Bay Area News, where he has been appearing since he returned there in 2014. He began his career at NBC Bay Area News more than three decades ago and spent several years reporting at other Bay Area television stations. Handa is also the host of “Asian Pacific America with Robert Handa”, a weekly talk show covering Asian newsmakers, events, community accolades and youth perspectives that airs Sunday mornings at 5:30 a.m. on NBC Bay Area and encores at 6 p.m. on COZI TV. Handa is an active member of many Bay Area organizations, including AAJA, KIMOCHI, Self-help for the Elderly, Yu Ai Kai Japanese American Community Senior Service and Asian Americans for Community involvement (AACI). He attended Sunnyvale High School, DeAnza College and San Jose State University.

An Asia-Pacific Affairs Member-led Forum program. Forums at the Club are organized and run by volunteer programmers who are members of The Commonwealth Club, and they cover a diverse range of topics. Learn more about our Forums.

In conversation with Robert Handa

President, The Bernard Osher Foundation; Member of the Board of Governors, Commonwealth Club of California 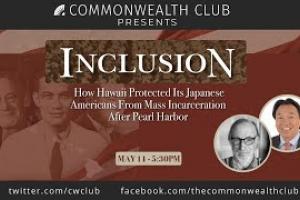 INCLUSION: How Hawaii Protected its Japanese Americans after Pearl Harbor