In the wake of Russia's invasion of Ukraine, great attention has been focused on a part of the world at the nexus of national and ethnic concern. On April 3, Rabbi Daniel Stein and Margalit Ir visited Krakow, Poland, to help Ukrainian refugees. In this special Commonwealth Club program, they will discuss their experience.

Ir, who is the child of Holocaust survivors, emigrated from Israel, which like many other countries has welcomed Ukrainian refugees. Celia Menczel, who sits on the elected council of the Interfaith Council of Contra Costa County, will talk about her family and about Vladimir Putin's autobiography First Person: An Astonishingly Frank Self-Portrait by Russia's President, which was recently mentioned in The Economist.

A Middle East Member-led Forum program. Forums at the Club are organized and run by volunteer programmers who are members of The Commonwealth Club, and they cover a diverse range of topics. Learn more about our Forums. 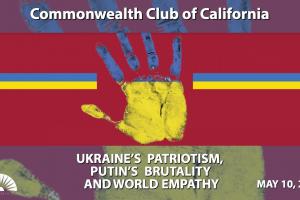