The election of Donald J. Trump in 2016 and the years that followed have brought significant changes to the Republican Party and, for many, what it means to be conservative. These shifts have been in process for many years, but the Trump presidency brought these significant changes to the center of America's political system. In short, from the start of the Reagan Revolution in 1980 to Trump's on-going role in the Republican Party today, the right is undergoing a massive transformation. Where this process leads will impact the shape of America's political system for decades to come, and is of interest to all across the political spectrum.

For Matthew Continetti, to know where American conservatism is going one must know where it’s been, and this 40 -year shift clouds the history of the conservative movement and its struggles within. In Continetti’s latest book, The Right, he describes how the conservative movement began as networks of intellectuals growing a vision for a more perfect government that eventually came under pressure from populist forces. To him, within conservatism there have been two opposing forces, one pulling closer to the center and one toward the fringe, and that these patterns both continue to the present day and explain the shifts of the movement between these two extremes.

Join us as Continetti lays out the long history of one of America’s largest political ideologies, and shows that by understanding the past, we can better understand American conservatism’s future. 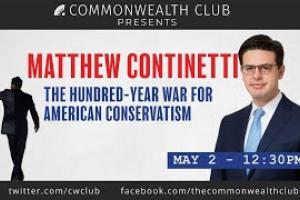