Tom Perkins: The War on the 1%

In conversation with Adam Lashinsky, Senior Editor at Large, Fortune

"I perceive a rising tide of hatred of the successful one percent," wrote Tom Perkins in a letter to The Wall Street Journal earlier this month.

Tom Perkins is the co-founder of Kleiner Perkins Caufield & Byers, one of Silicon Valley’s first Venture Capital firms on the legendary Sand Hill Road. He is an alumnus of Harvard and MIT, a renowned businessman and outspoken capitalist. In January of this year Tom Perkins wrote a letter published by The Wall Street Journal to “call attention to the parallels of fascist Nazi Germany to its war on its 'one percent,' namely its Jews, to the progressive war on the American one percent, namely the 'rich.'” The letter was widely criticized (in The Atlantic, The Independent among bloggers, Twitter users, and even "his own colleagues in Silicon Valley"). Perkins later apologized for making comparisons with Nazi Germany, but otherwise stood by the message of his letter.

Amidst Google bus protests and growing controversy over gentrification in the Bay Area, Tom Perkins has sparked a timely conversation and is not necessarily alone in his perspective. Join us for one man’s take. 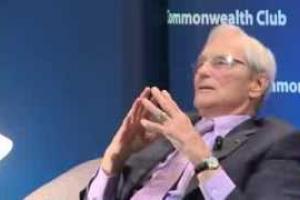