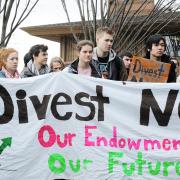 Youth in the Streets and in the Courts

Go To Past Event
from Youth in the Streets and in the Courts held on March 16, 2017

President Trump’s bold dismissal of climate change as a legitimate concern is energizing a new generation of teenage activists. Some are marching in the streets. Others are taking the federal and state governments to court, attempting to apply an ancient legal doctrine to the climate fight. It’s a longshot move that has been inching its way through U.S. courts for years and is now moving forward in Oregon.

Digital natives are known for short attention spans and thinking that being a “clicktivist” qualifies as civic engagement. Do teenagers have a chance to be heard and make an impact on an issue so complex and massive as the world’s energy system? How are young advocates using social media to advance their cause? Join us for a conversation about kids confronting powerful institutions and finding their own power and voices.

High school students who attend this event are eligible to apply for Climate One’s $12,000 Students on Ice scholarship. Greg Dalton created Climate One after traveling to the Arctic, and to pay it forward we now send a Bay Area high school student to the Arctic every year. The winning student joins 40 other youths on an ocean voyage from Canada to Greenland, where they learn about science and indigenous cultures. More information about this amazing journey will be given at the event, which students must attend in order to apply. Here’s a video of last year’s Climate One Arctic scholars.