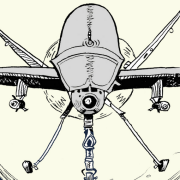 Go To Past Event
from Whistleblowers, Drone Warfare and Surveillance: A Graphic History held on November 7, 2017

Want to get the full story on post-9/11 American electronic surveillance … in the form of a graphic novel? Follow journalist Pratap Chatterjee and illustrator Khalil Bendib through their new book, Verax: The True History of Whistleblowers, Drone Warfare, and Mass Surveillance: A Graphic Novel, which blends Chatterjee’s sleuth journalism with Bendib’s comic illustrations for a uniquely visual perspective on a complex issue.

Chatterjee and Bendib explain the many ways that governments track individuals and countries, highlighting the complicity of tech giants such as Apple, Verizon and Google in these covert operations. They also share the stories of the journalists and whistleblowers such as Julian Assange and Edward Snowden, who blew the lid off electronic surveillance operations and exposed them for the entire world to see. Finally, Chatterjee and Bendib will predict the future of electronic surveillance practices and those who choose to resist them, asking: Whose side are you on?