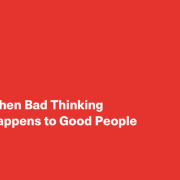 Go To Past Event
from When Bad Thinking Happens to Good People held on September 1, 2021

Have you gotten the feeling that this pandemic has also been spreading an epidemic of irrationality? From insisting that climate change is a hoax to believing that vaccinations cause autism, many are willing to reject outright even a solid scientific consensus. And though it may be somewhat amusing to hear COVID-19 being blamed on 5G networks, chemtrails or Bill Gates's insatiable greed, the amusement stops when bad thinking leads to bad acting, such as the January 6 assault on the U.S. Capitol.

Nadler and Shapiro argue that the best antidotes for such bad thinking and acting are the insights and practical skills of philosophy. Their engaging tour through the basic principles of logic, argument, evidence and probability can make anyone a more reasonable and responsible citizen. They also demonstrate how you can spot and avoid flawed arguments and unreliable information; determine whether evidence supports or contradicts an idea; distinguish between merely believing something and knowing it; and much more. In doing so, they reveal how epistemology (which addresses the nature of belief and knowledge) and ethics (the study of moral principles for governing behavior) can reduce bad thinking and bad acting. Ironically, it turns out that the millennia-old advice to know thyself, to aim at leading a good, rational and examined life, remains just as relevant today—that is, if you personally desire to overcome the current version of our seemingly endless human predicament.