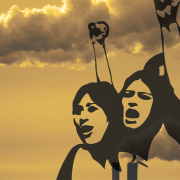 What Is a Just Transition?

The Green New Deal promises to take bold action on climate justice and rectify many of the inequities brought on by a fossil fuel economy. Advocates of the deal say the root causes of climate disruption and income inequality lie in extraction and exploitation. Skeptics, such as liberal former Congressman Barney Frank, insist American society can only swallow so much change at once. How can communities of color become key players in the decarbonization of the U.S. economy? In the world of climate justice, is the ideal the enemy of the possible?

Join us for a conversation the pathways to a clean and equitable economy with Kevin de León, president pro tempore emeritus of the California State Senate; Darryl Molina Sarmiento, executive director at Communities for a Better Environment; and Vien Truong, senior climate justice adviser at Tom Steyer for President.

Principal, Truong and Associates; Former Director, Green for All