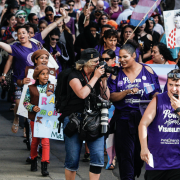 We Will Not Be Erased: What Is Next—A Community Discussion

Go To Past Event
from We Will Not Be Erased: What Is Next—A Community Discussion held on November 5, 2018

The Trump administration recently unleashed what's been criticized as another attack on transgender Americans by calling for the Department of Health and Human Services to redefine sex as biological under Title IX, which prevents gender-based discrimination. In response, LGBTQ communities and allies have mobilized community actions calling out the administration for what they're calling a blatant attempt to erase trans and gender nonconforming communities.

Join us for an informational discussion with community experts on strategies to address this latest attack and the impact of the upcoming November 6 election. Learn more on what this memo means, what people can do next.

Additional information on the speakers:

Honey Mahogany is a social worker, community advocate and known for her role on Season 5 of RuPaul's Drag Race. Named San Francisco's Best Drag by the B.A.R. and SF Weekly, Honey performs across the globe. Honey is also co-founder of the Compton's Transgender Cultural District, co-President of the Harvey Milk LGBTQ Democratic Club, a member of the San Francisco Democratic Central County Committee, and co-owner of the Stud.

Kris Hayashi has over 20 years of movement building, leadership and organizing experience. As a public transgender person of color, Kris has been a leader in movements for justice and rights for transgender and gender nonconforming communities for over 13 years. Kris became Executive Director at Transgender Law Center, one of the largest organizations in the country advancing the rights of transgender and gender nonconforming people, in February 2015. Prior to that, he had served over a year in the role of Deputy Director at the organization.

Clair Farley is Senior Advisor to the Mayor and Director of the Office of Transgender Initiatives with the City and County of San Francisco. She is a human rights and transgender rights advocate who has worked across the county and internationally to promote visibility for marginalized communities. She also worked for over a decade at SF LGBT Center leading their economic development and employment programs. She received the Outstanding Voices Award from San Francisco Business Times and was recognized as a “Soldier of Social Change” by the San Francisco Magazine’s annual Women in Power issue.

The event is hosted by The Commonwealth Club in partnership with "The Michelle Meow Show," the Office of Transgender Initiative’s Advisory Committee, TransCitySF, and TLC (Transgender Law Center)

Clair Farley
Senior Advisor to the Mayor and Director of the Office of Transgender Initiatives, City and County of San Francisco