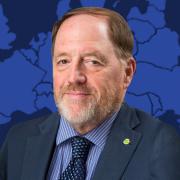 A Vision for Europe, with James K. Galbraith

Go To Past Event
from A Vision for Europe, with James K. Galbraith held on June 5, 2019

In late May, millions of Europeans will head to the voting booth for elections that will determine the future of the European Union (EU). As the Brexit controversy deepens and a violent populism rises in several European countries, this year's parliamentary elections will be decisive for the EU’s survival and instrumental in how major powers, including the United States, are affected.

Please join renowned economist, academic and author James K. Galbraith in a discussion of economics, politics and the state of the European continent after the critical elections. He will be in conversation with the UC Berkeley philosopher Hans Sluga, an expert in political philosophy, to celebrate the book launch of A Vision for Europe: an international collaboration of writers, theorists, artists, political leaders and activists who have joined forces in one groundbreaking volume of exclusive writing to show how the rising tides of nationalism can be tempered; the migration crisis managed; climate change combatted; and a better, fairer democracy built for all Europeans. The book, with additional contributions from leading political and cultural figures across the globe, including Yanis Varoufakis, Naomi Klein, Slavoj Zizek, Elif Shafak, Ken Loach and Jeffrey Sachs, will be available at the event.

James Kenneth Galbraith is a professor at the Lyndon B. Johnson School of Public Affairs and the University of Texas as well as a member of the Executive Committee of the World Economics Association. A prolific writer whose work has been featured in The Nation, The New York Times and The Washington Post, his books include The Predator State (2008), Inequality and Industrial Change (2001), and Created Unequal: The Crisis in American Pay (1998).

Hans D. Sluga is an academic specializing in analytic and political philosophy who has taught and lectured for the University of California and University College London. His writing has appeared in numerous academic journals and collections across the world in multiple languages, and his books include Politics and the Search for the Common Good (2014), The Cambridge Companion to Wittgenstein (1996), and Philosophy and Politics in Nazi Germany (1993).