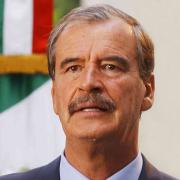 Go To Past Event
from Vicente Fox, Former President of Mexico held on April 19, 2017

Immigration, the Wall, and the Future of U.S.–Mexican Relations

To the American public, Vicente Fox may be Mexico’s most well-known, modern politician. Prior to becoming president, he received a top management diploma from Harvard Business School and went on to become president of Coca-Cola for Mexico and Latin America. He has most recently made national headlines by telling President Trump that Mexico “will not pay for that [expletive] wall,” and continues to engage President Trump on social media.

Fox was the first candidate from an opposition party to be elected president. Currently, he is actively involved in encouraging leadership and creating opportunities for less favored people through his organization Centro Fox. What are the realities and possibilities for the relationship between the U.S. and Mexico? Here’s a rare chance to get a unique perspective from one of Mexico’s most prominent and outspoken thought leaders.