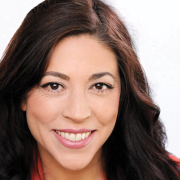 Go To Past Event
from Tina D’Elia on The Michelle Meow Show held on February 7, 2019

Tina D’Elia is a Bay Area award-winning solo performer, SAG-AFTRA actor, casting director, performance coach, co-screenwriter and consultant. Tina’s West Coast premiere of her solo show Overlooked Latinas (premiering in February 2019) has had previews at The Marsh SF, Solo Sunday’s (Stage Werx), and Best of LezWrites (2016, 2018). Tina received the Diversity Casting Award and Best Actress Award from the Equality International Film Festival in 2017. In 2015, Tina’s popular solo show directed by Mary Guzman, The Rita Hayworth of This Generation, won Best of Fringe and won Best of Sold Out Shows at the San Francisco Fringe Festival. Tina is honored to be part of CURVE Magazine’s CURVE Power list of 2017. She is the recipient of the Executive Producer Award and the Trail Blazer Award for diverse casting and her diverse creative solo performance work with the Equality International Film Festival.