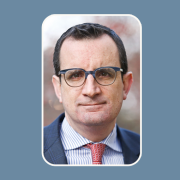 Thomas Wright: Pandemic Politics and the End of the Old International Order

Go To Past Event
from Thomas Wright: Pandemic Politics and the End of the Old International Order held on September 13, 2021

The COVID-19 pandemic has killed millions, infected hundreds of millions, and laid bare the deep vulnerabilities and inequalities of our interconnected world. The ensuing economic collapse was the worst since the Great Depression, undoing more than two decades of progress in reducing extreme poverty. Tensions between the United States and China boiled over, and the worldwide contest between democracy and authoritarianism deepened. At a time when this global crisis required a truly collective response, international cooperation had almost entirely broken down, with key world leaders hardly on speaking terms.

In Thomas Wright and Colin Kahl’s Aftershocks: Pandemic Politics and the End of the Old International Order, the two national security experts offer a definitive account of the global impact of COVID-19, the political shock waves it will have on the United States, and myriad ways in which the crisis exposed the limitations of the old world order. This comprehensive account of the year 2020 draws on interviews with officials around the world and extensive research to tell the story of how nationalism and major power rivalries constrained the response to the worst pandemic in a century.

Co-author Thomas Wright is a senior fellow at the Brookings Institution and a contributing writer at The Atlantic. He has written several extensively researched pieces analyzing Donald Trump’s foreign policy.

Join us as Thomas Wright delves into his latest analysis of one of the strangest and most consequential years on record.