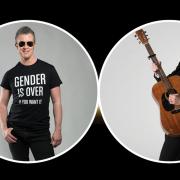 Taking the Stage with Sean Dorsey and Shawna Virago

Go To Past Event
from Taking the Stage with Sean Dorsey and Shawna Virago held on October 24, 2019

Join us for a conversation with a leading trans artistic couple—Shawna Virago and Sean Dorsey—about their lives as transgender activists and successful performing artists.

Shawna Virago is a singer and songwriter who is known for her striking lyric-based songs. She was one of the country's first openly transgender women to perform and tour nationally. She is also the artistic director of the San Francisco Transgender Film Festival, which will take place November 7–10 at San Francisco's Roxie Theater.

Sean Dorsey founded and leads the Sean Dorsey Dance troupe, which is celebrating its 15th year. He is known as the nation's first critically acclaimed transgender choreographer in modern dance; he has toured 30 cities domestically and abroad. He has been awarded four Isadora Duncan Dance Awards and the Goldie Award for Performance.

Come for a free midday program, as Michelle Meow brings her long-running radio show to The Commonwealth Club one day each week. Meet fascinating—and often controversial—people discussing important issues of interest to the LGBTQ community, and have your questions ready.