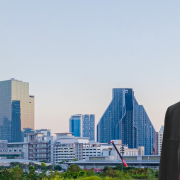 Survival of the City, with Edward Glaeser and David Cutler

Go To Past Event
from Survival of the City, with Edward Glaeser and David Cutler held on September 14, 2021

Prior to the COVID–19 pandemic, many cities, particularly in the United States, were experiencing somewhat of a renaissance. Population was increasing, abandoned areas were being redeveloped into walkable neighborhoods, crime was dropping, and public spaces were engaging both a new generation of citizens and an older cohort who had moved to cities for the first time. In many ways, cities were fulfilling the vision of renowned urban economist Edward Glaeser as places that were the healthiest, greenest and richest (in both cultural and economic terms) places to live, and as areas that were rich in creativity and innovation.

The 18 months since March 2020 have tremendously challenged this rosy view of cities, and today cities like San Francisco stand at an unexpected crossroads. During the global coronavirus crisis, cities grew silent as many office workers worked from home—if they could work at all. The normal forms of socializing ground to a halt. Theaters and restaurants were quiet, and cultural arts organizations scaled back public programming. Things were supposed to return to normal for cities this fall, but the delta variant of the coronavirus has raised new questions about urban life: How permanent are these changes? Advances in digital technology mean that many people can opt out of city life as never before. Will they? Are we on the brink of an unexpected, post-urban world?

In their new book, Glaeser and his Harvard colleague David Cutler explore the future of cities. Though they believe city life will survive overall, individual cities face terrible risks, and a wave of urban failure could pose a threat not only to urban residents of particular cities but to all of those who rely on them. Glaeser and Cutler examine the evolution that is under way and describe the possible urban futures that lie before us: What will distinguish the cities that will flourish once again from the ones that won’t? The authors discuss San Francisco in the book and how COVID-19 allowed for wealthy citizens to flee the city in search of more space to do remote work.

Edward Glaeser
Fred and Eleanor Glimp Professor of Economics, Harvard University; Co-author, Survival of the City: Living and Thriving in an Age of Isolation

David Cutler
Otto Eckstein Professor of Applied Economics, Harvard University. Co-author, Survival of the City: Living and Thriving in an Age of Isolation