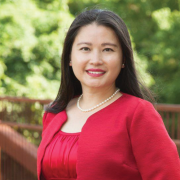 Go To Past Event
from Sunny Panyanouvong-Rubeck: Looking to Make History held on August 6, 2020

If Republican Sunny Panyanouvong-Rubeck wins her election to be a judge in the North Carolina 26th Judicial District, she would become the first Lao-American judge in U.S. history.

Join us for a conversation about politics, identifying with the GOP, and the issues that are impacting immigrants and communities of people of color.

In 1981, her family was sponsored by a Baptist church when they arrived as refugees to the United States. Panyanouvong-Rubeck says she dreamed of a judicial system that treated everybody with fairness and equality. She credits her ability to seek election to a judgeship to America’s heartfelt welcoming attitude and its commitment to the inalienable rights of life, liberty and the pursuit of happiness.