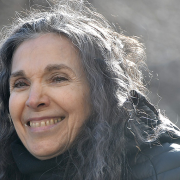 Such a Pretty Girl: A Story of Struggle, Empowerment and Disability Pride

Go To Past Event
from Such a Pretty Girl: A Story of Struggle, Empowerment and Disability Pride held on December 4, 2019

“Such a pretty girl.” It was a refrain Nadina LaSpina heard frequently in her native Sicily. What was sometimes added, and what was always implied, was that it’s a shame she was disabled. Having contracted polio as a baby, LaSpina was the frequent target of pity by those who dismissed her life as hopeless. She came to the United States at 13 and spent most of her adolescence in hospitals in a fruitless and painful quest for a cure.

Against the political tumult of the 1960s, LaSpina rebelled both personally and politically. She refused to accept both the limitations placed on her by others and the dominant narrative surrounding disability. LaSpina also took to the streets with the then fledgling disability rights movement that has changed both law and perception in the United States. As an activist, LaSpina has been arrested numerous times. She was an important figure in some key struggles, including those that led to the passage of the Americans with Disabilities Act of 1990.

LaSpina discusses why pity has been one of the most hurtful things she’s had to contend with in her life, that the problem was not her disability but the way she was treated because of it, and that the assumption that to be disabled is to be miserable is itself the most miserable part about being disabled.

Disability Rights Activist; Author, Such a Pretty Girl: A Story of Struggle, Empowerment, and Disability Pride