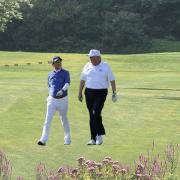 Go To Past Event
from Sportswriter Rick Reilly: How Golf Explains President Trump held on June 12, 2019

For decades, a range of authors have tried to explain who Donald Trump is, what makes him tick, and, since he has become president, what drives his political decision-making. Legendary sportswriter Rick Reilly thinks one of the best ways to understand who the 45th president of the United States really is as a person is to study how he golfs, a sport Reilly reveres.

In his new book, Commander in Cheat: How Golf Explains Trump, Reilly takes readers on an on-the-ground and behind-the-scenes look at Trump's ethics deficit on and off the course. Reilly has been with Trump on the fairway, the green and in the weeds and has seen firsthand how the president plays—and it's not pretty. Based on his personal experiences and interviews with dozens of golf pros, amateurs, developers, partners, opponents and even caddies who have firsthand experience with Trump on the course, Reilly takes a deep and often hilarious look at how Trump shamelessly cheats at golf, lies about it, sues over it, bullies with it and profits off of it.

Reilly, in conversation with beloved Bay Area sportswriter Joan Ryan, will outline a new and amusing way to think about the current president, his administration and one of the country's most popular sports.