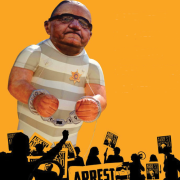 Go To Past Event
from Sheriff Joe Arpaio vs. the Latino Activists Who Took Him Down held on July 29, 2021

Journalists Terry Greene Sterling and Jude Joffe-Block spent years chronicling the human consequences of Sheriff Joe Arpaio’s relentless immigration enforcement in Maricopa County, Arizona. In Driving While Brown, they tell the tale of two opposing movements that redefined Arizona’s political landscape—the restrictionist cause embraced by Arpaio and the Latino-led resistance that rose up against it.

Sterling and Joffe-Block reported on Arpaio, his supporters, and his adversaries, including Lydia Guzman, who gathered evidence for a racial-profiling lawsuit that took surprising turns. Guzman joined a coalition determined to stop Arpaio, reform unconstitutional policing, and fight for Latino civil rights. In the process, Arpaio transformed from "America’s Toughest Sheriff," who forced inmates to wear pink underwear, into the nation’s most feared immigration enforcer who ended up receiving President Donald Trump’s first pardon.

Join us for an online discussion with the two authors and their investigative reporting, which provided critical insights into the planning and community organizing that helped transform Arizona from a conservative stronghold into a battleground state.

In response to the COVID-19 pandemic, we are currently hosting all of our live programming via YouTube live stream. This program was recorded via video conference on July 29th, 2021 by the Commonwealth Club of California.