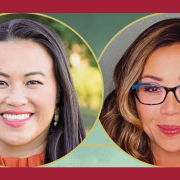 Go To Past Event
from Sheng Thao and Connie Wun: Today's AAPI Women held on May 19, 2022

An APA Heritage Month special: Join us for an online panel discussion with two AAPI women touching on the lived experiences of being an AAPI woman today. They'll cover a wide range of issues, including the mental health impact of issues such as racism, gender violence, and oppression.

Oakland City Council President Pro Tem Sheng Thao grew up in poverty, the 7th of 10 kids. Her parents met in a refugee camp in Thailand after each fled their home country of Laos and the genocide against the Hmong people. Thao’s parents immigrated to America, settling in Stockton, where they would make a living farming vegetables. It was here Thao was born. She left home at the age of 17. When her son Ben was 10 months old, Thao got a job at Merritt College and also started taking classes. And, with the help of welfare and a Head Start program for Ben, she put herself through school. She became class valedictorian, then transferred to UC Berkeley, where she co-founded a food access program for low-income students and graduated with a degree in legal studies. She eventually ran for Oakland's City Council District 4 and won, becoming the first Hmong-American woman Councilmember in California history. She’s currently Council president pro tem and chairs the Rules and Legislation Committee. Thao received the 2021 Powerful Women of the Bay Award for her work on behalf of Oakland’s diverse neighborhoods, and has been honored by the Alameda Labor Council for her record of delivering for working families. Thao is also president of the League of California Cities API Caucus, and has served on boards for the Redwood Heights Association and Oakland Asian Cultural Center. She is an Oakland mayoral candidate.

Connie Wun, Ph.D., is the executive director and co-founder AAPI Women Lead. As a part of her work in ending racial and gender-based violence, she leads national research projects on race, gender, and violence. Wun is a 2020 Soros Justice Fellow, a former National Science Foundation fellow, and a recipient of numerous awards, including the 2021 California Asian Pacific Islander Legislative Caucus Excellence in Civil Rights award and 2021 Gold House A100 award. Her research has been published in academic journals, anthologies, and online platforms. She is also a former high school teacher, college educator, sex worker, and sexual assault counselor.