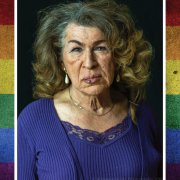 Meet a pathbreaker and a powerful persona.

Donna Personna is an artist and activist for transgender rights who got her start with the Cockettes. She has served on the boards of Trans March and Transgender Day of Remembrance, and on the committees to name streets after Vicki Marlene and Compton’s Cafeteria in San Francisco’s Transgender Cultural District. In 2018, she raised San Francisco’s first transgender flag at City Hall with Mayor London Breed. Donna was the subject of the Iris Prize-winning 2013 short film My Mother and was featured in the film Beautiful by Night. Donna has been covered in media outlets such as Out, The Advocate, the San Francisco Chronicle, and the Daily Beast. The immersive play she co-wrote, The Compton’s Cafeteria Riot, recreates San Francisco transgender history and received many accolades, including SF Weekly’s Best of 2018.