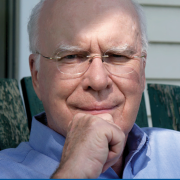 Go To Past Event
from Senator Patrick Leahy: My Life in Politics held on September 14, 2022

From post-Watergate reforms, to the fall of the Soviet Union, the impeachment of Bill Clinton, 9/11 and the Iraq War, the Great Recession, the two Trump impeachment trials, and the January 6 insurrection, Senator Patrick Leahy has been at the heart of the discussion of the country's politics and direction for nearly half a century. In his memoir, The Road Taken, Senator Leahy gives a first-hand reflection of the historic events during his tenure.

Senator Leahy is the longest-serving U.S. senator and was first elected in 1974. He has held numerous committee appointments, including some of the most powerful in the Senate, including chair of Appropriations and a member of the Judiciary and Rules Committees. In the second Trump impeachment, Leahy became the first U.S. senator to preside over an impeachment trial.

Leahy gives the full narrative of his historic political career—from meeting Presidents Obama and Biden while they were still freshman legislators, to leading the way on Supreme Court nominations, to his cameos in five Batman movies. He also reflects on his time in Vermont and his passion for photography

Please join us for an intimate discussion with one of the country's most tenured lawmakers.