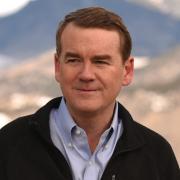 Widely recognized as a pragmatic and independent thinker, Democratic presidential candidate and Colorado Senator Michael Bennet is on the forefront of taking on Washington, D.C.’s dysfunction and building more opportunities for the next generation. In the Senate, Bennet has spearheaded legislative efforts to make education, health care, childcare and housing more affordable and accessible for working families. Running for the presidential nomination to restore integrity to our government, Bennet has been twice singled out by former President Barack Obama as someone to watch following the 2016 election.

Compelled to reveal the inner workings of Congress in our polarized era, Bennet shares his perspective in his book The Land of Flickering Lights: Restoring America in an Age of Broken Politics. Despite his exposure to the complex issues and extreme polarization rampant in today’s politics, Bennet remains strong in his conviction that patriotism, hard work and belief in the common good can revive a prosperous and powerful democracy for the generation of tomorrow.

Join us for an engaging conversation with presidential candidate Michael Bennet as he guides us through his vision to restore ethics in American politics.

In Conversation with Scott Shafer
Senior Editor for the Politics and Government Desk, KQED