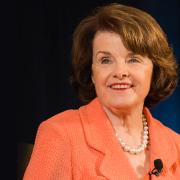 Go To Past Event
from Senator Dianne Feinstein held on August 29, 2017

A Conversation About America and the World

Senator Dianne Feinstein is one of the most accomplished women of our time, serving California in the U.S. Senate for nearly 25 years. During her tenure, she has served on numerous Senate committees and has pioneered many indelible legislative achievements. Before serving in the Senate, Dianne Feinstein was the first female president of the San Francisco Board of Supervisors and the first female mayor of San Francisco. She was elected to the U.S. Senate in 1992 with former U.S. Senator Barbara Boxer (D-CA) in the Year of the Woman, eventually becoming the first woman to serve on the Senate Judiciary Committee, Intelligence Committee and Rules Committee. She has established a reputation as a bipartisan leader willing to work with both sides of the aisle to solve difficult problems.

As California’s senior senator, she has focused her career on emphasizing national security, combatting crime, and protecting California’s waters, deserts and forests. Join Senator Feinstein for a wide-ranging discussion on her career as senator, California’s role on the national stage and current domestic and international challenges.

In Conversation with the Honorable Ellen Tauscher