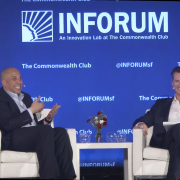 Go To Past Event
from Senator Cory Booker: United held on February 19, 2016

This is a Good Lit event, underwritten by the Bernard Osher Foundation.

Cory Booker, the junior U.S. senator from New Jersey, has built his career in public service by fighting for his belief that we as a nation must come together and rise above that which divides us in order to protect the principles and ideals that unite us. Senator Booker's first book, United: Thoughts on Finding Common Ground and Advancing the Common Good, details the people who inspired him to seek public office, the moments that influenced his civic vision once he was elected and the issues that drive his political agenda, such as social, economic and environmental justice. In United, Senator Booker also calls for the American people to refocus our attention and especially our politics on the principals of compassion and solidarity to steer our nation toward a brighter future.

In Conversation with Gavin Newsom