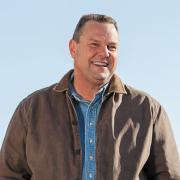 Sen. Jon Tester: How Democrats Can Win in Rural America

Go To Past Event
from Sen. Jon Tester: How Democrats Can Win in Rural America held on September 29, 2020

In a political system more divided than ever, people like Senator Jon Tester can be the bridge.

Jon Tester is a U.S. senator from Montana, a farmer, and . . . a Democrat. Tester was born and raised in Montana and grew up on his grandfather’s homestead—the same land he and his wife farm today. As he grew up he learned the value of hard work, a connection to the place you live, and honesty. The values he learned growing up continue to guide him as he, a Democrat and former public school teacher, serves the red state of Montana as their senior senator.

Tester has learned how to connect with his community, moving beyond divisive party titles to instead see his constituents as his neighbors, friends and community members in need of effective leadership. In his new book Grounded: A Senator's Lessons on Winning Back Rural America, Tester shares his early life, his rise in the Democratic party, his vision for helping rural America, and his strategies for reaching red state voters.

Join us to hear from Jon Tester as we learn about the values he remains grounded in while governing, and how politics and politicians must adapt in order to heal a divided nation.