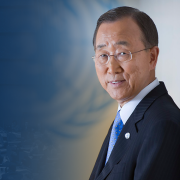 Go To Past Event
from Secretary Ban Ki-moon: Uniting Nations in a Divided World held on June 22, 2021

The United Nations is built on principles of peacekeeping and human rights, and where leaders work to create a sustainable, equitable world. UN leaders, however, are always meeting challenges in their work; as human problems become more complex, so does the work of the organization.

Ban Ki-moon knows these issues firsthand. He served as the eighth secretary-general of the United Nations from 2007–2016, and he took strong positions on global warming, peacekeeping and human rights. In his new book Resolved: Uniting Nations in a Divided World, Ban Ki-moon recounts his own experiences in a war-torn nation, the lifesaving generosity from the United Nations, and the challenges he faced as a diplomat in the intergovernmental institution.

Even when facing resistance, he bravely steered the United Nations through a volatile period that included the Arab Spring, nuclear pursuits in Iran and North Korea, the Ebola epidemic, and brutal new conflicts in Central Africa. He describes his role as “the most impossible job on Earth”—but with a strong belief in collective action and global transformation, he persevered.

Join us as Ban Ki-moon candidly assesses the integral parts of the United Nations and offers a bracing analysis of what lies ahead.

Secretary-General of the United Nations (2007-2016); Author, Resolved: Uniting Nations in a Divided World

In Conversation with Mina Kim