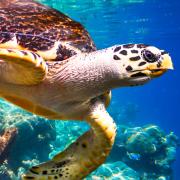 Sea Changes: Why Oceans Play a Bigger Role in Climate Than You Think

Go To Past Event
from Sea Changes: Why Oceans Play a Bigger Role in Climate Than You Think held on April 23, 2019

Global temperatures would be soaring even higher were it not for a powerful heat-trapping ally: oceans. From regulating the temperature of the planet to generating half of the oxygen we breathe, oceans are a vital part of sustaining life on Earth. Increasing their temperature as little as two degrees, however, has an opposite effect, threatening marine biodiversity and turbocharging dangerous hurricanes and typhoons.

But there are bright prospects on the horizon for humans and oceans. Underwater, large-scale marine protected areas are an example of how ocean life can thrive with bold conservation efforts. Above the surface, offshore oil rigs are being replaced with wind farms, poised to be a significant driver of clean energy. Will coastal communities that once shunned offshore drilling welcome fossil fuel free wind power? What is the future for coastal communities and ocean biodiversity threatened by climate change?

Join us for a conversation on the health and future of our oceans with Sara Aminzadeh, commissioner with the California Coastal Commission; Ken Caldeira, scientist with the Department of Global Ecology at the Carnegie Institution for Science; and Daniela Fernandez, founder and CEO of the Sustainable Ocean Alliance.

This program is generously underwritten by Bank of the West

Ken Caldeira
Scientist, Department of Global Ecology at the Carnegie Institution for Science