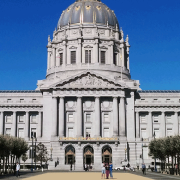 Go To Past Event
from The San Francisco Civic Center held on June 10, 2019

Monday Night Philosophy looks into the local history of how the Civic Center was created. San Francisco is known for its iconic man-made structures such as the Golden Gate Bridge, cable cars and the Transamerica Pyramid. Its Civic Center is yet another of its urban planning marvels. Featuring the grandest collection of monumental municipal buildings in the United States, it was originally planned and designed by John Galen Howard in 1912 and is considered one of the finest achievements of the American reformist City Beautiful Movement.

James Haas meticulously unravels the story of why the Civic Center was built, of how it became central to the city's urban planning initiatives in the early 20th century, and of how it held onto its founders’ vision despite heated public debates about its function and achievement. Its history is riddled with controversy as well as inspiring leadership, but the Civic Center remains a stunning manifestation of the confident spirit of San Francisco's dynamism and creativity.