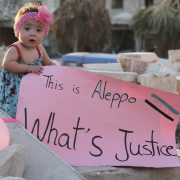 For Sama: A Mother's Tale of Syria's War

For nearly nine years, civil war has raged in Syria. The conflict has created millions of refugees and devastated countless towns and cities.

For Sama is a new documentary that tells the story of one woman’s journey through love, motherhood, war and survival during five years of the Syrian conflict. Directed by Emmy award-winning filmmaking duo Waad al-Kateab and Edward Watts (Escaping ISIS), the film chronicles the experiences of 26-year-old Syrian filmmaker Waad al-Kateab, who filmed her life in the rebel-held city of Aleppo over five years.

Join us for an in-depth discussion with al-Kateab and Watts for a view of the Syrian conflict you've never seen before.

Hamza Al-Kataeb
Subject of For Sama; Husband of Waad