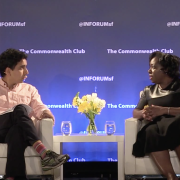 Go To Past Event
from Sal Khan with Black Girls Code’s Kimberly Bryant held on April 8, 2015

“Imagine the impact that these curious, creative minds could have on the world with the guidance and encouragement others take for granted. I have, and I can’t wait.” – Kimberly Bryant

In 2011, only 6 percent of STEM (science, technology, engineering and mathematics) workers nationwide were black, up a mere 4 percentage points over the last 40 years, according to the U.S. Census Bureau. For black women, the minority of minorities in the STEM world, access to opportunities that will shatter Silicon Valley’s “boy’s club” and diversify the industry have been long coming. Kimberly Bryant is looking to hasten this change. Founder of Black Girls Code, a nonprofit offering after-school programs and summer programs for young women of every color, Bryant seeks to give Silicon Valley’s next generation of girls a fighting chance to program the future, one line of code at a time.

Join us for a conversation between Kimberly Bryant and another innovator bridging the digital divide, Khan Academy founder Sal Khan. This is the first in a new INFORUM series of interviews featuring Sal Khan in conversation with diverse leaders pushing the limits of learning and breaking boundaries in their industry.