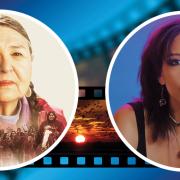 Go To Past Event
from Sacheen Littlefeather and Sivan Alyra Rose: Native Americans in Film and Media held on September 20, 2019

Come for an intergenerational conversation on Native American representation in film and media from experienced Apache actress Sacheen Littlefeather to breakout Apache actress Sivan Alyra Rose. Sacheen is known for the protest at the Oscars, in which she represented Marlon Brando and raised attention about the Wounded Knee standoff, and Sivan for her role as the first Native American actress to lead a TV series—"Chambers" on Netflix. Both are known for utilizing their platforms for tribal rights and issues.

This conversation will be moderated by Sarah Eagle Heart and Michelle Meow.

Following the program, Littlefeather will sign free posters for the new documentary about her life, "Sacheen," which is currently showing in film festivals around the world; and Sivan will sign special edition posters by Ernesto Yerena highlighting her historic role as the first Native American female lead of a TV series.