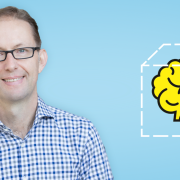 Go To Past Event
from Russell Poldrack: Why Our Brains Make Habits Stick held on May 13, 2021

Irregular sleep schedules, smoking cigarettes, skipping meals, procrastination: common bad habits and vices can seem nearly impossible to break. “Quick fixes” to ending unhealthy cycles are rarely backed by scientific evidence, making the process of retraining your brain more difficult and frustrating. Neuroscientist Russell Poldrack, however, conjectures that the brain is a habit-building machine, and to curb unwanted behaviors, we must use evidence-based strategies to build healthy habits. In his new book Hard to Break, Poldrack offers an explanation of how habits are built in the brain, why they are so hard to break, and how evidence-based strategies might help us curb bad behaviors.

Russell Poldrack is a professor of psychology at Stanford University whose research has focused on learning and memory, neuroinformatics and data sharing, and decision-making processes. He has gained recognition from the American Psychological Association and the Organization for Human Brain Mapping for his stellar research in the field. In his new book, Poldrack reveals how we can make the changes we desire, and why we should have greater empathy with ourselves and others who struggle to do so.

In Conversation with Dr. Daniel Levitin
Founding Dean of Arts and Humanities, Minerva Schools at the Keck Graduate Institute; Author, Successful Aging: A Neuroscientist Explores the Power and Potential of Our Lives