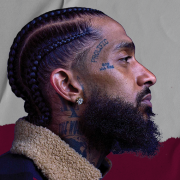 Rob Kenner and Davey D: The Life and Times of Nipsey Hussle

Go To Past Event
from Rob Kenner and Davey D: The Life and Times of Nipsey Hussle held on March 25, 2021

Nipsey Hussle lived a life full of passion for his craft and compassion for his community. As a prolific rapper and artist, Nipsey strove for excellence in his work without forgetting Crenshaw, Los Angeles, the neighborhood he grew up in and sought to lift out of poverty. In his new book The Marathon Don’t Stop: The Life and Times of Nipsey Hussle, music journalist Rob Kenner studies Nipsey’s life in exacting detail, sharing interviews from friends and family that reveal unknown information about Nipsey’s goals and mission. While Nipsey’s tragic passing deprived the world of his future success, Kenner emphasizes the influence Nipsey already held at his young age.

Join Rob Kenner at INFORUM to learn more about Nipsey’s life and his legacy, which will have an impact long beyond his lifetime. This conversation is moderated by Dave “Davey D” Cook, a hip hop historian and professor at San Francisco State University.