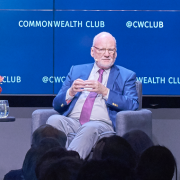 Go To Past Event
from Richard Clarke: Cyber Threats in the Digital Age held on July 23, 2019

Cyber warfare is at the intersection of innovation and danger. It can be comical, like the malware which blasted AC/DC’s song “Thunderstruck” at full blast in the middle of the night in Iranian nuclear facilities. It can also be catastrophic, like EternalBlue, the 2017 cyber battle that closed hospitals in Britain and froze shipping crates in Germany in midair. Richard Clarke, former U.S. national coordinator for security, infrastructure protection and counterterrorism, takes us behind the scenes with the scientists, executives and government officials who are on the forefront of cyber technologies.

In the new book, The Fifth Domain: Defending Our Country, Our Companies, and Ourselves in the Age of Cyber Threats, Clarke explains that the threat of cyberattacks is manageable and provides concrete steps that can be taken toward cyber resilience, including building more resistant systems, raising the costs for cyber crime and avoiding the trap of overreacting to digital attacks. From the quantum-computing labs racing to develop cyber superweapons to the boardrooms of corporations that have been hacked to the corridors of U.S. intelligence agencies that work to defend against these attacks, Clarke effortlessly guides readers through the complexities of this fifth domain. Join us for a timely discussion with a former White House terrorism czar on this pressing issue.

Richard Clarke
Former U.S. National Coordinator for Security, Infrastructure Protection and Counterterrorism; Co-Author, The Fifth Domain: Defending Our Country, Our Companies, and Ourselves in the Age of Cyber Threats; Twitter @richardclarke