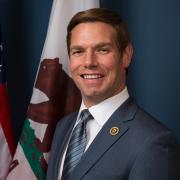 Go To Past Event
from Rep. Eric Swalwell: Presidential Candidate held on June 14, 2019

Representative Eric Swalwell, an East Bay Democrat and fixture in Bay Area politics, launched his presidential campaign on “The Late Show with Stephen Colbert” in April 2019. Swalwell’s long-awaited announcement is another marker of the generational shift emerging in the 2020 election, and he is sure that millennials are ready to take on the country’s toughest issues.

Swalwell was first elected to Congress at the age of 31 after winning an upset primary contest against a 40-year Democratic incumbent. Now 38, he is one of the youngest candidates in the presidential race and, if elected, would be the youngest president in American history. He is a vocal advocate for stricter gun policies and student debt reform, two issues that have earned him national recognition.

Swalwell joins INFORUM to chronicle his rise in Congress, discuss his highly anticipated campaign and urge Americans to “go big, be bold, and do good.”