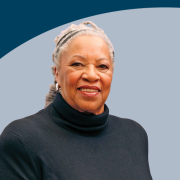 Go To Past Event
from The Real Toni Morrison, With Filmmaker Timothy Greenfield-Sanders held on December 5, 2019

Toni Morrison, who passed away in August, was one of the most celebrated writers of our time. She was awarded the Nobel Prize in Literature, the Pulitzer, National Book Critics Circle Award, the Presidential Medal of Freedom, and more.

Earlier this year, a new documentary film about Morrison, The Pieces I Am, premiered at the Sundance Film Festival. The film covers the life and impact of Morrison, and it includes interviews with Morrison, Angela Davis, Fran Lebowitz, Peter Sellars, Oprah Winfrey and others.

Join us for an engaging conversation with the director of The Pieces I Am, Timothy Greenfield-Sanders. A Grammy Award-winning filmmaker, Greenfield-Sanders has achieved critical acclaim photographing world leaders and major cultural figures, including presidents, writers, artists, actors, and musicians. He has produced and directed 13 documentary films, including Lou Reed: Rock and Roll Heart (which was recognized with a Grammy), The Black List (which earned him an NAACP Image Award), The Latino List, and The Trans List.