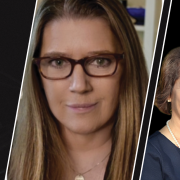 Go To Past Event
from Radio Program: The Trump Era, with Mary Trump, Carol Leonnig and Philip Rucker held on September 26, 2021

Mary Trump joined us just hours after it was announced that her uncle, former President Donald Trump, was suing her and The New York Times over the public release of his tax information. She explores how our current trauma is the logical outcome of the stories we tell ourselves, the myths we embrace, and the lies we perpetuate. She says an enormous amount of healing must be done to rebuild our faith in leadership, and our hope for this nation, and it starts with the reckoning.

Also, Washington Post reporters Carol Leonnig and Philip Rucker reveal what they learned about the final days of an administration they say was sabotaging its own country. Their sources were in the room as Trump and the key players around him—doctors, generals, senior advisors and family members—continued to prioritize the interests of the president over that of the country. These witnesses saw firsthand Trump’s desire to deploy military force against protests in the wake of George Floyd’s death. They saw his refusal to take coronavirus seriously, even to the point of allowing himself and those around him to be infected. They, along with the rest of the world, saw him spur on what would become the January 6 storming of the U.S. Capitol building.

In Conversation with Molly Jong-Fast
Editor at Large, The Daily Beast