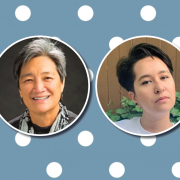 QTAPIs: The Personal and the Political

Go To Past Event
from QTAPIs: The Personal and the Political held on November 16, 2021

Join us for an intergenerational panel discussion of QTAPI (queer and trans Asian Pacific Islander) people discussing and sharing stories of their personal involvement in politics and community organizing.

The Asian and the Pacific Islander communities are not monoliths unto themselves, so no program can possibly speak to the breadth of diversity and uniqueness in those communities. But we will explore certain moments in the panelists' own personal histories and lived experiences as they reflect on questions such as: What got them involved in API and/or LGBTQ issues? Was there a specific moment that moved you to become involved? Who were your mentors? How has your involvement changed from when you started? What is the most rewarding aspect of this work? And more.

James Coleman was elected to the South San Francisco City Council in 2020, becoming the city’s youngest and first openly LGBTQ+ council member at the age of 21. He is a lifelong resident of South San Francisco, attending K-12 public school in the city. After graduating, James went on to Harvard University to study human developmental and regenerative biology, with a minor in government. Compelled by the COVID pandemic, nationwide protests against police brutality, and the intensifying climate crisis, Coleman ran a grassroots campaign for city council in his hometown to help bring about the change he wanted to see in his community. He is passionate about improving early childhood care and education, addressing climate change, and making South City a safe, affordable and enjoyable place to live. Before his election to the city council, James worked at a neuroscience lab at Massachusetts General Hospital. He has also been an organizer involved with the Action for Climate Emergency, the Harvard Undergraduates for Environmental Justice, Fossil Fuel Divest Harvard, and Harvard College YDSA.

Valli Kalei Kanuha Ph.D., is a teaching professor and the assistant dean for diversity, equity and inclusion at the University of Washington. She was born and raised in a rural town in Hawai'i in the 1950s. She is the daughter of a Native Hawaiian father and Nisei mother. Dr. Kanuha considers herself a critical, indigenous, feminist, activist-practitioner scholar with a focus on gender violence against women and children, and the intersection of race/ethnicity and gender and sexual identity. For the past 45 years, she has worked as a community-based researcher and consultant with organizations in Hawai'i and the continental United States, and lectures widely on violence against women and social justice issues. Her research and community interests include using indigenous, culturally based interventions for family and domestic violence; intimate violence in women's same-sex and queer relationships; and alternative, community-based justice innovations to address interpersonal and state violence, including critiques of carceral systems, transformative and restorative justice, and abolition feminism.

Sammie Ablaza Wills is an enthusiastic, queer, non-binary Pilipinx organizer passionate about supporting people in reclaiming their inherent power and dignity. Growing up in a hustling class immigrant household, Wills' political journey started with witnessing xenophobia against their family, fighting budget cuts in public schools, and learning about trans Pilipinos fighting colonization. Wills is the outgoing executive director of APIENC, a grassroots organization building power for transgender and queer Asian and Pacific Islander people in the Bay Area, where they originally started as a youth summer organizer. In their current role, Wills supports hundreds of community members to organize for rights, build intergenerational connections, and heal for trans justice. Alongside organizing work, Sammie is a death doula and community archivist.

Willy Wilkinson, M.P.H., is an award-winning writer, public health consultant, and cultural competency trainer who has been advocating for marginalized populations since the early days of the HIV/AIDS pandemic. He is the author of the Lambda Literary Award-winning book Born on the Edge of Race and Gender: A Voice for Cultural Competency, which illuminates trans experience from a Chinese American and mixed heritage perspective, and transforms the memoir genre into a cultural competency tool. Over the past four decades, Willy has organized queer and trans communities for connection, visibility and health-care access. Willy is the recipient of a National Lesbian and Gay Journalists Association Award and the Transgender Law Center Vanguard Award, and was the first trans recipient of the Asian and Pacific Islander Queer Women and Transgender Community Phoenix Award. He lives in Oakland, California on Ohlone land with his creative, adventurous partner and three clever kids in elementary, middle and high school. Learn more at www.willywilkinson.com.