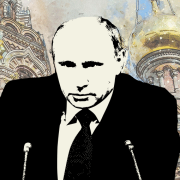 Go To Past Event
from Putin’s Quest for Greatness held on April 11, 2019

Coming into power in 2000, Vladimir Putin had a message: Russia must be “lifted off its knees.” He spent the next 19 years implementing this vision—removing constraints on presidential power, rolling back civil society and reforging an ideological state that he markets domestically as “great Russia.” Has his strategy to reverse territory losses and status left Russians in a better place—and at what price? As American democracy struggles with encroaching authoritarianism, Russia, the country that has succumbed to it, offers a cautionary tale.

Anastasia Edel came of age in the last decades of the Soviet Union and was witness to Gorbachev’s perestroika, collapse of the USSR and Russia’s wild transition to capitalism. A recipient of the British government’s Chevening award, Edel studied in England and moved permanently to the United States in 1997. Edel is a contributor to The New York Times, The New York Review of Books and Project Syndicate. Visit her at: www.anastasiaedel.com.