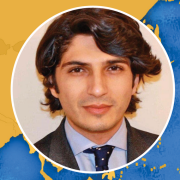 Go To Past Event
from Progress Toward Middle East Peace held on April 29, 2021

Elsalameen, a prominent activist, social media analyst, political commentator and public speaker will discuss Arab-Israeli progress toward Middle East peace with Jonathan Curiel, journalist and author. As a known critic of Palestinian Authority President Mahmoud Abbas and of Hamas, Elsalameen will also discuss how President Abbas's "reign has been marred by corruption," etc. (Elsalameen recently accused Fatah’s military wing of sending him death threats for his pro-democracy and anti-corruption work.)

Born in Hebron, Elsalameen is an adjunct senior fellow at the American Security Project, which was created to develop an American national security vision and strategy for the 21st century. He is also a successful businessman with working experience in the United States, the Middle East, and Africa, a graduate of Seeds of Peace and of the Johns Hopkins School of Advanced International Studies (SAIS) program.